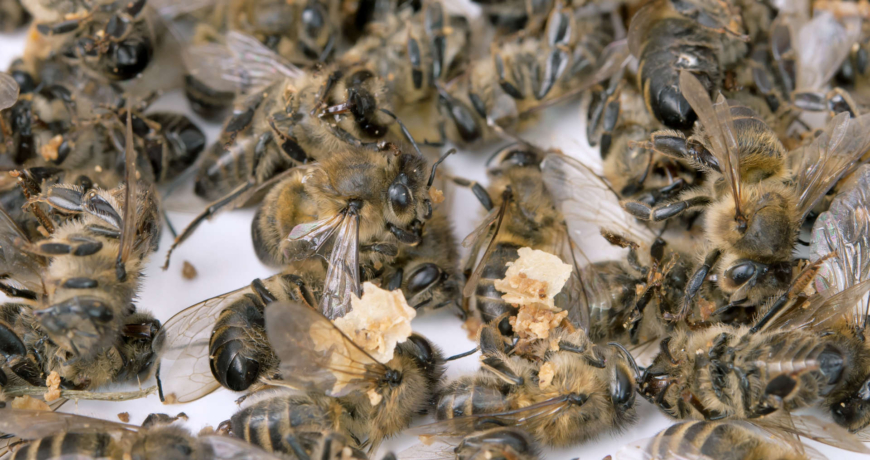 The phenomenon of the mass extinction of bees has become a worldwide problem in recent years and has led scientists in many countries to analyse its causes in depth. It is known that about 30% of food is produced thanks to pollination of plants by bees, so their extinction would lead to unimaginable losses in agriculture and the whole economy. It turns out that the reasons for the disappearance of bee colonies are many and together they form a deadly mix for these extremely useful insects.

The most important of the factors harmful to bees is considered to be the use of excessive amounts of artificial fertilisers and plant protection products, especially pesticides from the neonicotinoid group, which are included in insecticides for seed and spraying treatment. These substances, which are lethal to bees, accumulate both in the whole plant, in the soil and even in the sugar used to feed the bees in autumn and winter.

The issue of direct poisoning caused by incompetent and irresponsible sprayers who do not follow the instructions for use should not be overlooked either. Farmers’ carelessness can result in the poisoning of entire apiaries which are using the forage base of the plantation being sprayed.

The change in the structure of farms and the expansion of areas under a single crop are resulting in a lack of biodiversity, which is essential for the proper functioning of bee colonies. Their food must consist of a mixture of different types of pollen and nectar. Monocultures also result in longer dry spells, which, in the case of stationary apiaries, can lead to colony starvation and weakening.

The low popularity of sowing aftercrops, such as vetch, mustard, phacelia and others, results in a lack of late-summer and autumn benefits, when the bee colony needs large amounts of pollen for proper preparation for wintering.

There has been a change in the organisation of home gardens and parks for some time. Once full of multi-coloured flowers and melliferous trees and bushes, they are now “haunted” by rows of towering thuja trees, conifers and evenly trimmed grass. They require little maintenance, but bees will find little for themselves in such surroundings.

Bee diseases and pests are a very dangerous factor, spreading at an extremely fast rate. One example is varroa mite infestation, which is decimating apiaries all over the world. Various forms of nosema, a microsporidia disease of the digestive tract, are very dangerous to bees. It weakens the bees considerably and thus increases their susceptibility to other diseases.

Over-exploitation of bee colonies by repeatedly transporting apiaries to huge plantations, where bees arrive from all over the country, promotes the spread of bee diseases and pests. Transporting bees for many hours in closed hives has a very negative effect on the health and condition of the insects.

A cursory analysis of the causes of the disappearance of bees shows that the basic factor is a man himself, who constantly wants to improve nature and disregards its laws. This is due to an excessive desire for profit and a lack of awareness that by destroying nature we are also harming mankind.

No products in the cart.