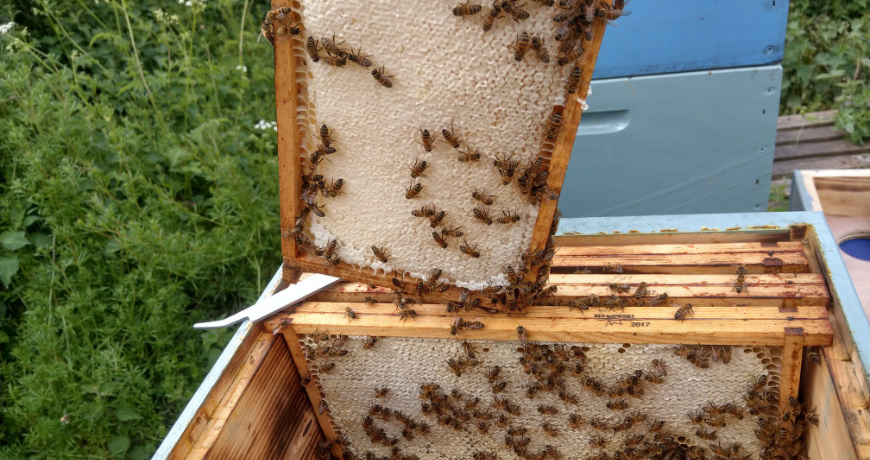 The history of honey starts in the Cenozoic Era, about 60 million years ago, when in the world appeared bees of Apis type. The first references reporting that a human appreciated bees and took benefits from the effects of their work can be seen on rock paintings from the Mesolithic Era, dating back to the 11 000 – 4 800 years BC and originated from Asia and Europe.

Beekeeping was also known in Australian areas, which is proven by wax paintings created by Aborigines 2 000 BC. In Central America in turn, it is confirmed by the fragments of hives and wild beehives excavated by the archeologists. The Egyptians also dabbled with beekeeping. What’s interesting in Egypt paid for work in honey, which states how high this natural nutrition was estimated.

Tradition of a human and Apis mellifera bees coexistence is indeed very long and at the same time very interesting. For millions of years bees obtain honey in the same way – from plant’s nectar or honeydew. For thousands of years a human can join this boon of nature, still discover new tastes and health-promoting benefits.

The norm establishes honey as a food product made by bees from plant nectar, honeydew or plant nectar and honeydew. What follows we distinguish three types of honeys:

The primary product to produce nectar honey is nectar produced by flowers’ nectaries. The substance entices pollinating insects with its scent and high concentration of sugar.

The variety of nectar honey depends on a flower species from which a bee collects nectar:

The precious components of honey are: micro and macroelements (about 30 elements) and the most important are: iron, magnesium, manganese, cobalt.

Prosperities and application of honey:

Remember that the enlisted honey prosperities vanish, if we heat it too hard, boil or melt it in hot water. Then we deactivate the enzymes included in honey, thanks to which it has such a strong healing prosperities. The best of many ways is melting honey in lukewarm, boiled water and using it to drink, brush, lubricate or rinse. Especially valuable, good for health and medicinal is drinking a half glass of water with a spoon of honey on an empty stomach in the morning. But watch out! The drink has to be prepared in the evening, so that biocatalysts contained in honey could undergo activation. It is recommended to add one tablespoon of pollen.

Types of honeys and their properties:

Acacia – Colourless or light straw-coloured. It does not undergo crystallisation for a long time because of the prevalence of fructose. After crystallisation it is white or light straw-coloured. It has a slightly perceptible scent of acacia flowers. It is recommended for diabetics, during colds, digestive disorders, kidneys and urinary bladder diseases. Used for gastric hyperacidity and digestive system disorders. It strengthens cardiovascular systems, cleanses the liver, has sedative, diuretic and bactericidal aspects.

Buckwheat – From dark tea-coloured to dark brown. Used in the treatment of catarrh of the upper respiratory tract. Fosters the formation of bone tissue after breaks. Helpful during states of mental exhaustion, in sclerosis, hypertension, nephritis and hectic fever. The honey contains a lot of bioelements.

Lime – Light yellow or greenish-yellow coloured and after crystallisation yellow-orange or dark brown. Has antiseptic and sedative properties. To enhance its effects, it is served in tea from lime tree flowers. Used for hectic diseases, cough and bronchitis. Effective in treatment of colds, states of anxiety and insomnia.

Goldenrod –  Light yellow and after crystallisation it switches into creamy consistency. It has a special and very characteristic acidic taste, which definitely distinguishes it from other types of honey. Used in the treatment of the urinary tract, prostate, bile ducts and joints. It has diuretic, cholagogic, anti-inflammatory and disinfectant effects. It has a lot of rutin and quercetin, which improves blood circulation of kidneys and veins of lower extremities.

Rapeseed – Colourless, sometimes straw-coloured or lemon and creamy-white after crystallisation. Very sweet in taste, which makes it easily recognisable, it has a slightly perceptible scent of blossoming rapeseed. It is the honey of the highest contents of glucose and amino acids. Used predominantly in diseases of lungs and heart (glucose is a perfect nutrition for muscles, especially heart muscle). Apart from this it is used for constipation, diseases of the liver (increases its detoxifying possibilities), kidneys and urinary tract.

Honeydew – Grey or brown-green. Its taste is slightly resinous. After crystallisation it forms the characteristic for itself clumps. It contains a lot of proteins, and what follows it has more nutritional and medicinal value than nectar honeys. Used for anaemia and metabolism disorders. Coniferous honeydew honey cures catarrh of the upper respiratory tract. It has anticancer properties, helpful for asthma and kidney stones.

Multiflower – From light straw, through dark tea-coloured, even to dark brown. The colour and the taste are strongly dependent on the type of a flower around which a bee was hovering. Used for allergies of various kinds and hay fever. Because of stronger inhibin properties multiflower honey is most often used for prevention and treatment of a cold and the flu. It is also used for curing lower respiratory tract diseases. It has heart healing properties.

Heather – Red-brown coloured and after crystallisation it takes jelly-like consistency. Used in curing the diseases of the oral cavity, throat, mucosa, urinary tract, prostate, kidney stones, enteritis and diarrhoea. It does not damage the enamel.

Honeydew honey- it can be produced from coniferous and deciduous honeydew. Honeydew honey is formed from excretion of aphids and scale insects, because these insects after the extraction of plant juice absorb proteins and other substances, but they excrete undigested sugars. This sweet excretion entices bees and ants, which gather it as their nutrition. Honey is produced by bees from nectar and honeydew. The majority of plants have nectaries inside their flowers. They are honey glands, from which bees take nectar. Honeydew is a sweet secretion falling down in drops from leaves and branches of some trees and bushes. Honeydew is the substance excreted by insects. They take from leaves or needles large amounts of juice as nutrition and not being able to absorb such a great amount of sugars they excrete it in the form of droplets. Honey contains 70% of carbohydrates in the form of monosaccharides – glucose and fructose, organic acids, flavone: rutin and inhibin, enzymes, such as lactose, invertase, glucoamylase, micro and macro elements, vitamins. The range of honey activities is connected with the presence of valuable enzymes and obviously they influence metabolic conversion and take direct part in it.

Honey should appear in an everyday diet of children, youth, people who work hard physically and mentally. This valuable product is especially recommended for students. Honey has detoxifying prosperities. That is created in a liver, as the result of the process of glycosidase, glucuronic and pyruvic acids bind with toxic substances, creating easily dissolving conjoinings, what allows their excretion with urine. Therefore, people living in industrial areas, as well as having contact with different drugs, should not eliminate honey from their menu.

Professor Tabershow from the USA did research, during which he proved that systematic consumption of honey delays the emergence of silicosis, for example in miners, for 8-10 years. Honey definitely has bacteriostatic properties, both for gram-positive and gram-negative bacteria.

Antibiotic properties of honey are conditioned by three rules:

It was acknowledged that a sweet bee product works as a stimulant for the immunological system, strengthening organism immunity. Thanks to its properties honey is used in the treatment of numerous diseases of the skin, gastrointestinal tract, respirator, urine, cardiovascular, haematological and even nervous system.

No products in the cart.